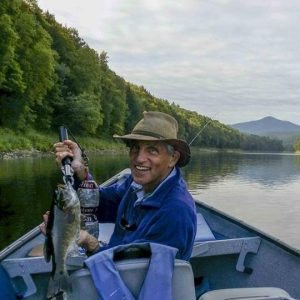 Dr. Robert Alan Sofferman tipped in his last putt in 2015 after a long battle with multiple myeloma. “Dr. Bob” was nearly as passionate about golf as he was about medicine. He would have been thrilled to know that he was helping others through the VGA scholarship.

Bob grew up in Milburn, New Jersey, where his lifelong love of golf was kindled at nearby Crestmont Country Club. He began caddying at Crestmont at a young age, often carrying two bags at once. Bob graduated from Lehigh University in 1963 and University of Maryland Medical School in 1967. He began his surgical internship at the University of Colorado in 1968, where he met and married his wife of 47 years, Barbara (McCann) Sofferman. Bob was drafted into the U.S. Army in 1968 and served three years as a major at the U.S. Army Hospital in Berlin, Germany during the Vietnam War. His daughter, Rebecca was born in Germany and his son, Brooke, was born in Massachusetts when the family returned to the states. In 1975, after completing his residency at the Massachusetts Eye and Ear Infirmary, the family moved to Colchester, VT, where Bob took what he thought would be a temporary appointment as a member of the Department of Otolaryngology and Assistant Professor of Surgery at the University of Vermont College of Medicine. He loved it so much here that he stayed on for the remainder of his career, becoming Chairman of the Otolaryngology Department at Fletcher Allen Health Care in 1977, and Professor of Surgery in 1993.

Bob’s love of golf is well known and although he enjoyed the competition, it was the many enduring friendships he made through the game that meant the most. He was fortunate to have been able to play at some of the best courses in the world including Augusta National, Cypress Point, and St. Andrew’s but remained fiercely loyal to his home course. Bob cherished his membership at the Burlington Country Club for over 35 years. He won the BCC Invitational in 1985 with his good friend Fred Auletta and the Mixed Scotch Tournament with his wife, Barbara, that same year. He won the MacAndrews tournament with Barry VanGerbig in 1988 and the Match Play Championship in 1997. He won the BCC Four Ball Senior Championships with Bob Davidson in 2009 and Art Shields in 2013. In 2001 he was the BCC Senior Club Champion.

Bob was the quintessential Renaissance man. Not only was he an avid outdoorsman and nature appreciator, enjoying golf, cross-country skiing, snowshoeing, kayaking and fly fishing, he also was an excellent photographer. His beautiful photographs adorn the walls of many homes around the world as well as at UHC and BCC. Bob also loved woodworking, played guitar, was an avid music enthusiast (of all kinds but especially jazz) and possessed an encyclopedic knowledge of Steven Wright jokes.

All those who knew Bob were touched by his compassion, his enthusiasm for new things, his dedication, his incredible sense of humor, and his brilliant and perpetual smile that absolutely lit up a room. He lived life on his own terms, doing things his way, and always a little differently than anyone else. He dedicated his life to helping others, not just in his capacity as a physician, but anyone he came across. He was a perfectionist, a lifelong scholar, an artist, a loving father, husband, brother, son, and grandfather, and one of the kindest and happiest people anyone ever met.